I have begun the process of preparing for my much anticipated Republican Roman project by doing some research, asking many questions and sketching some ideas on paper. The first thing I needed to do was understand the organization and deployment of the Republican army during the Second Punic War. Once that was understood, I could apply those principles to the gaming table and tweak for the nuances of the Hail Caesar rules. Sounds simple enough, but like everything Roman, it turned out to be fairly complex.

The Romans of this time had moved away from the traditional and popular large phalanx formations to one that used much smaller groups of soldiers called Maniples (literally "handfuls"). The Romans also deployed in much shallower lines with the Velites (skirmishers) at the front followed by the Hastati, the Prinicipes and finally the Triarii. For gaming, the actual number of men in each of these groups is less important than the prescribed ratio of: 2 Velites : 2 Hastati : 2 Prinicpes : 1 Triarii.

What does that mean for a game of Hail Caesar? I will be fielding all of the units in a Republican Roman legion as small units to capture the manipular system (at least aesthetically). I typically use the middle of the size range specified for unit sizes, which means that these small units will have a frontage of 100mm (my standard units have a frontage of 180mm). As you can see in the diagram below, a full legion (infantry only) will have a total of fourteen units with two command stands to help with smooth game-play. This will also allow me to easily "cut the legion in half" if I need to play with fewer units.  At the advice of others, I have reduced the footprint of the skirmishing Velites to below their normal numbers for smoother game-play.

I created the diagram below to capture these plans for the upcoming project. It illustrates the makeup, layout, base sizes and model numbers of a legion. The next step is to place an order for enough models for a full Republican legion. I will most likely be using Aventine figures for this army almost exclusively. 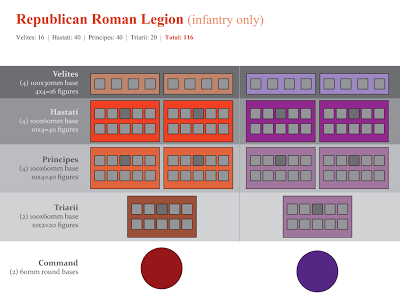