After six months of being away I needed to take stock of where I am on my Punic Wars project and set some new goals for getting some things completed. I have picked back-up the Republican Romans and I am making some rapid progress on a small unit of principes. My stock of unpainted Romans is getting smaller and, after I complete this current unit, will have only one more unit of principes and one unit of triarii to paint to complete exactly half of my first legion's infantry.

Time to get another order in to Aventine. In addition to ordering the other half of the legion's infantry (two units of velites, two units of hastati, two units of principes and one unit of triarii) I will also be ordering some Roman cavalry at the same time so I can be sure to get those started soon.

I'm planning on having a small game of Hail Caesar with my son Maxwell in a few weeks. Carthaginians versus the might of Rome. I'm excited to move some units around the table again, but I am pretty sure I have forgotten nearly every rule of Hail Caesar. Time to read the book again.
Posted by Jonathan at 3:58 PM 71 comments:

Hi everybody, It is good to be back! This winter has been, for various professional and personal reasons, a very odd season. I have been obviously distracted from the hobby as I have dealt with both fantastic and difficult circumstances these past six months. Things seem to be sorted at the moment and I am returning to a life that will not only be happy, but filled with plenty of time available to once again pursue this hobby that I enjoy so much.

I hope the handful of readers that I had before my abrupt departure are still around and that you are still well. I'll be visiting your blogs and checking up on your progress over the next few days. ;) As much as I have missed painting and gaming, I have missed interacting with the community just as much. Time for me to get caught up.

I have been  back at the painting table working again on my Roman Republic army while listening to the Ancient Warfare podcast. That is some good inspiration! Below is a WIP of four Roman principes that are nearly complete (figures by Aventine). 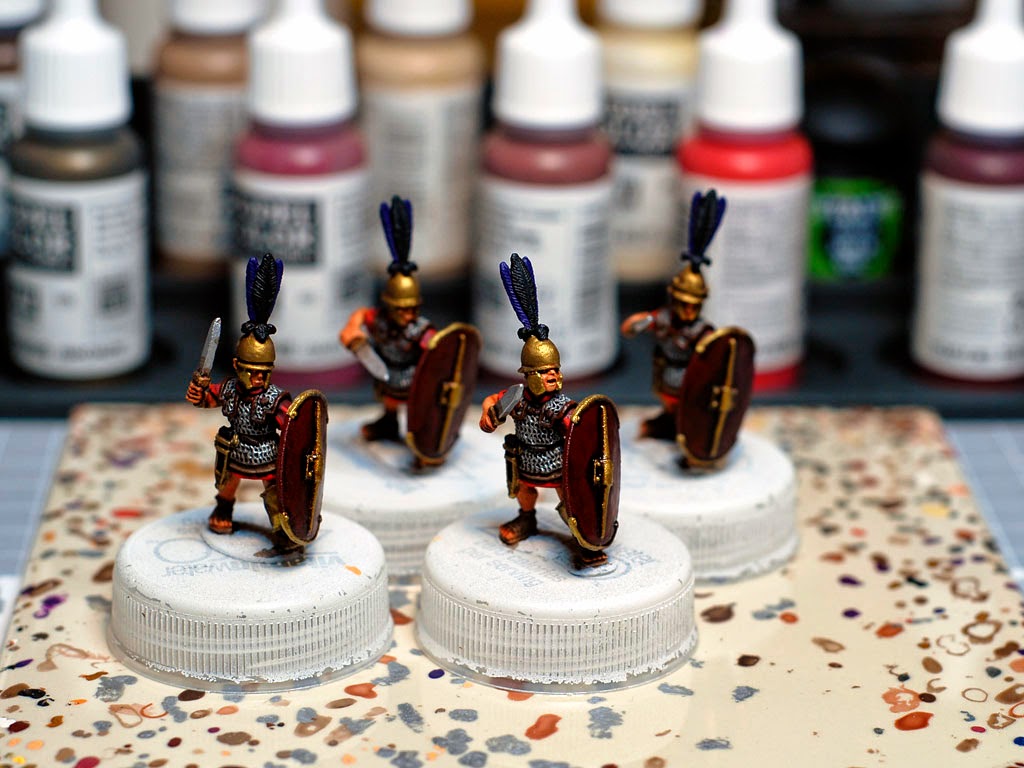 Email ThisBlogThis!Share to TwitterShare to FacebookShare to Pinterest
Labels: Roman Republic, The Hobby

And so my new project begins. I have been dropping hints about this for months, but I finally pulled the trigger on a new project that I am very much looking forward to - The Muscovite army of Ivan the Terrible. Russian history is and has always been a very important part of my life - I have a Master's degree in Russian history, I have published articles on Russian history, I once held a position teaching Russian history at a University and I speak and read the Russian language (although at a much more rudimentary level than I once did). I am actually surprised it has taken me this long to dive into a project like this from a wargaming perspective. I suppose I wanted to make sure I did it right.

Russian history is as immense and vast as its landscape, and I have chosen this particular period of time for a couple of reasons. First, it is during a period of transition in Russia in terms of politics, foreign policy, technology and military organization. Transitional periods of history are always interesting. Second, there is a very distinct Russian flavor to what is happening during this period prior to the grand westernization of the court and the military under Peter the Great.

The Muscovite army of Ivan IV was a reflection of the society that produced it. The Muscovite army did not develop along "Western lines", but this was not necessarily due to backwardness (as many casual observers suggest) or an inability to absorb new ideas and methods. The Muscovite army was created to fight in Russia's wooded steppes and plains, criss-crossed by huge rivers. Muscovy was the hostage of its location; there were no natural borders to keep out invaders. Muscovy was surrounded by series of states each jockeying for domination; Muscovy's ultimate victory, even her ultimate survival, was never inevitable. What made her successful was the creation of a large military force capable of absorbing organizational and technological change.

What rules will I be using? I'm not sure yet. I'd love to be able to use Warlord's Pike & Shotte, but that might require some rule modifications to capture some of the flavor, style and tactics of this army. Luckily, that would be pretty easy. I have also purchased the PDF version of the Maximilian! rules for evaluation. But rules and games are a long way off yet, so for the time being I will simply enjoy the research and painting of this grand army.

The Assault Group (TAG) has an excellent range of figures for this army that I plan on using with perhaps some supplemental pieces coming from other manufacturers as needed. The image below shows my first unit that I'll be painting: the strel'tsy. I will be providing more in-depth historical information about the strel'tsy in future posts, but for know it will be enough to know that they were the first standing, permanent infantry force. The conventional date of its founding is 1550.

This should be a an exciting project.

Email ThisBlogThis!Share to TwitterShare to FacebookShare to Pinterest
Labels: Muscovy

On a whim, I decided to paint the second (of three) ancient buildings that have been sitting on my table for a few months before getting started on the Roman principes. I forgot how much work these buildings really are to paint and how much time they take to complete, but once finished they are worth it and will look great on our gaming table. This building has a fantastic stone front porch and stone steps and I decided to paint each stone individually which really added to the time it took to finish but I'm glad I did it.

This is the medium single story house produced by Grand Manner. It is a fantastically detailed model. My only real (small) complaint is the impression one gets that the house is decaying, perhaps abandoned and certainly not well maintained due to the cracks and number of areas of exposed breaks on the walls. When I am gaming, this house is meant to be current and vibrant -- it is lived in, maintained and even loved by its occupants.

I hope you enjoy the photos. 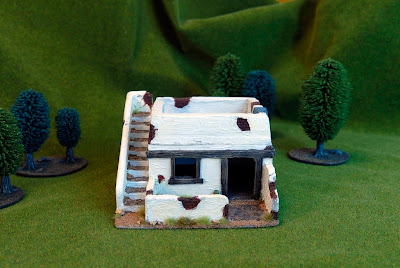 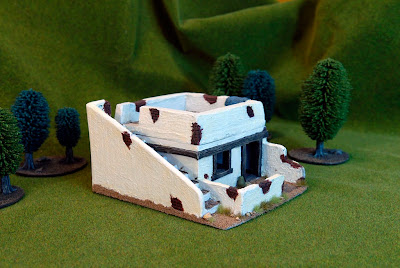 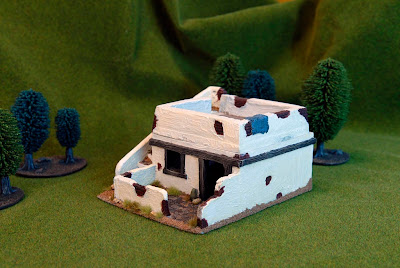 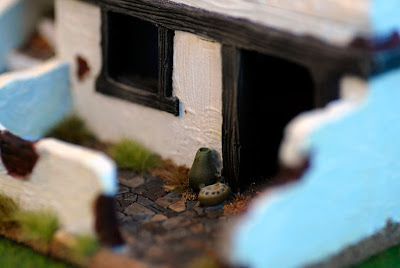 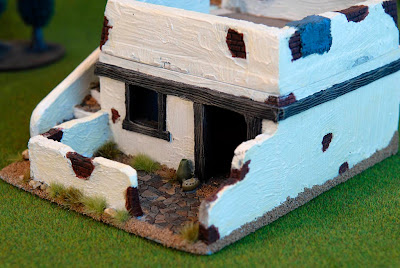 Email ThisBlogThis!Share to TwitterShare to FacebookShare to Pinterest
Labels: Scenery

Maps of Rome, Carthage and the Punic Wars

I have a great love for maps and so over the past year I have enjoyed gathering and saving various maps related to my current Punic Wars project. Some of these maps give a fantastic overview of the region at the time, some show the expanse and retreat of the Roman and Carthaginian empires, while others map the specific troop movements and battles of the wars. These maps will be extremely useful for planning and playing a campaign with my Roman and Carthaginian armies once they are completed.

I thought I would gather these maps all up into one post for others who may be interested in these as a resource.


Maps of the Hannibal's Invasion


Battle Maps of the Punic Wars

Next up for the Republican Roman army is two small units of principes. Like the other figures in this army, these are all by Aventine Miniatures. I decided to represent the entire unit wielding their gladii rather than having any pila in the mix. Aventine provides all of these figures with the sword arm detached, which allows for a wide range of attack poses which is a very nice touch.

Prepping models isn't one of my favorite aspects of the hobby, and so I choose to do it it small bunches -- usually just enough to complete a single full unit. This is very likely a much slower process in the long run than preparing a full eighty figures at once, but it breaks up the un-fun into manageable chunks.

The Aventine figures are great when it comes to getting them ready for priming and painting. There are very few seams or cast lines - and those that do exist are very faint, easy to remove and are never on the face or other vital pieces. Most of the work seems to be getting their bases flat and even. 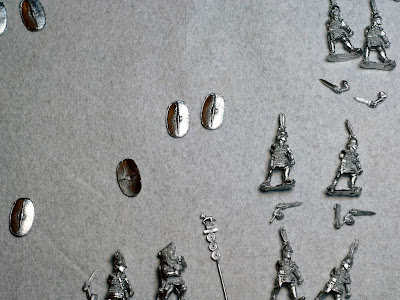 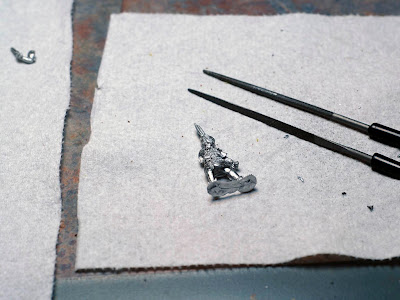 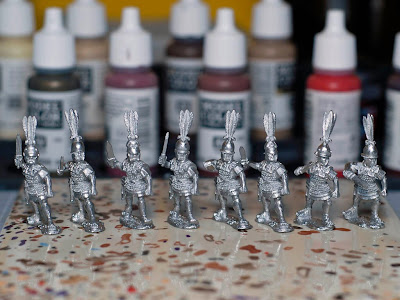 The first command stand for my Republican Roman is complete. Seen here is one of the legion's military tribunes directing the primus pilus. Six tribunes command the legion, each taking turns for two months at a time to be in the overall command. The tribunes received their orders directly from the consuls. The primus pilus, or senior centurion, was the very first of the legion's thirty elected centurions. With them is a signifer carrying a standard with an image of a laurel wreath. Affixed atop the standard is the a scene containing the Capitoline Wolf and Romulus and Remus. 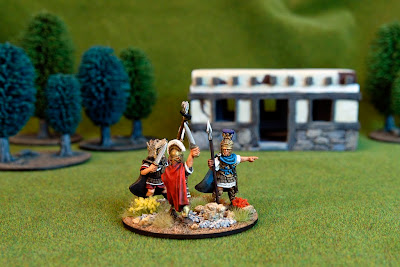 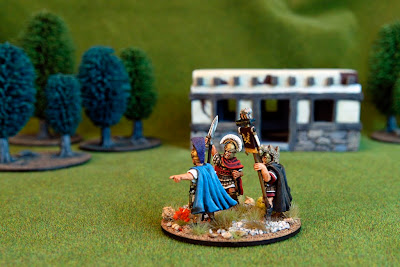 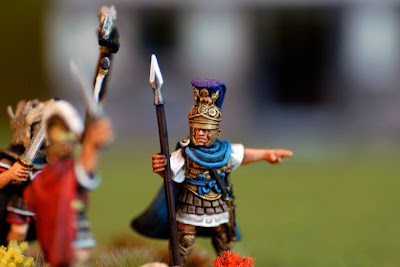 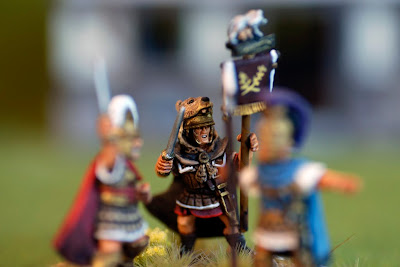 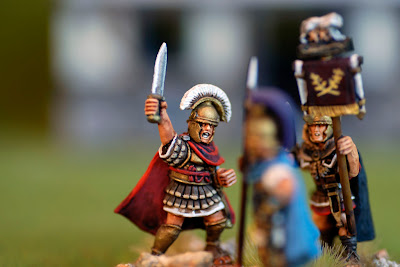 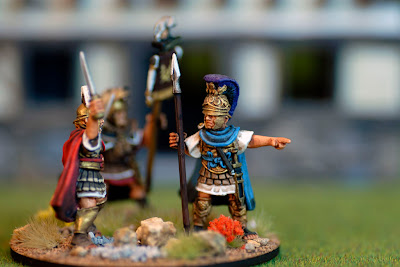 While doing some research, I came across these amazing etches of Roman soldiers by Wenceslaus Hollar. Hollar was a bohemian artist that was born in Prague in 1607 and died in London in 1677. I found these to be quite remarkable and thought I would share.