A Musician of the Carthaginian Army

Before jumping in and painting up a second full unit of Spanish scutarii, I am going to take a few days to paint  and base the three figures that make up the Carthaginian Veteran Command set from Relic Miniatures. I received these models for Christmas from a very generous Secret Santa and I have really been looking forward to painting them. These figures will all be used together on a command stand for the Carthaginian army, but I want to showcase them all individually here as I paint them.

First up is the wonderful musician. Musicians played an important role in the command and control structure of ancient armies. This can be illustrated by Aesop's fable The Trumpeter Taken Prisoner:


A Trumpeter, bravely leading on the soldiers, was captured by the enemy. He cried out to his captors, "Pray spare me, and do not take my life without cause or without inquiry. I have not slain a single man of your troop. I have no arms, and carry nothing but this one brass trumpet." "That is the very reason for which you should be put to death," they said; "for, while you do not fight yourself, your trumpet stirs all the others to battle."

In its most simplistic application, the instrument (typically a flute or horn) was used to coordinate and regulate the cadence (and thus speed) of the various army units to ensure that everybody arrived at the battle at more-or-less the same time while remaining in formation. By the time of Alexander there is documented reference to very specific trumpet signals used by commanders to give orders to their army. By the fourth century AD, the calls played by musicians on their instruments had become considerably more sophisticated with different sets of instruments used to signal the movement of standards, the other the troops and the third non-combat details. I imagine the musicians also supplied entertainment around the nightly fires of an ancient army on the march.

Up to now, the rules that I have played have not contained any special rules that govern musicians and their influence on the troops, and so for now they are added to the units and command stands as mere historical flavor.

I am going to start posting the color palette for the models I paint. This will be a great way for me to keep track of what I do with colors and perhaps this will be useful to you as well. Let me know what you think. 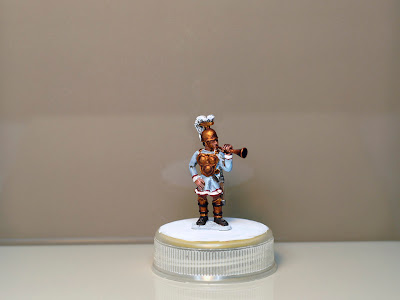 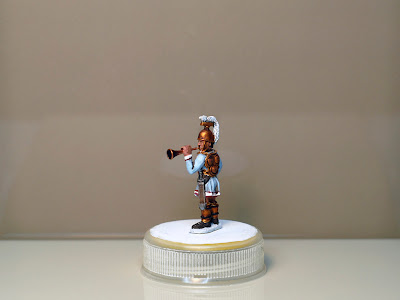 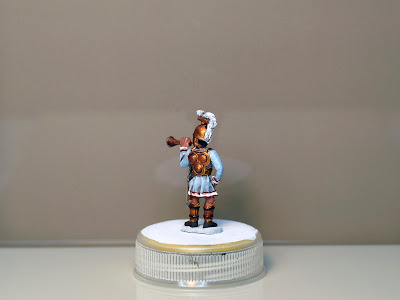